Matterport Pro3 Camera – Will It Be Worth the Wait?

As seasoned professionals providing real estate virtual tour services we’re more than excited to see how the Matterport Pro3 Camera will improve the way we work. Having said that, we’re aware that right now there are many rumours and not much concrete info.

But with the release date slowly closing in, all that’s left is for us to see what Matterport has prepared. Heck, we don’t even have a confirmed release date for the Pro3 camera yet, but some rumours seem more legit than others. So what do we hope to get when it finally drops? Which features are most likely to be included in the Matterport Pro3 camera?

One of the first rumoured release dates for the matterport pro3 camera goes back to the fourth quarter of 2020. As we all know, 2020 was a year with many not-so-great events, so it’s completely understandable why CMO at Matterport Chris Bell was hesitant to say the exact date, even though he confirmed the Pro3 is in development.

The next guess was that the new Pro3 camera would be released at the same time as Matterport went public, which was in the summer of 2021. However, although Matterport did go public, the release date of the new camera was nowhere to be found.

There hasn’t been any credible information coming from Matterport themselves, except that it will be coming out later this year. So our best advice is to be patient and wait for the official statement regarding the Matterport Pro3 camera’s exact release date.

Until then, let’s dive deeper into some of the great features we’d like to have that would improve the quality and efficiency of everyone providing real estate virtual tour services.

Some features would definitely be priceless and create a bigger gap in quality when it comes to Matterport and their competitors. Matterport is already doing a great job, and they’ve positioned themselves as the leading manufacturer of 360 / 3D cameras.

We’ve been advocates and longtime users of the Matterport hardware since our inception in 2018. As every camera user knows with technology rapidly advancing every day, we’re always on the lookout to upgrade our gear and do a better job. Currently, we’re using the Matterport Pro2 camera, which is definitely a great tool helping us to create a high-quality end product for our clients.

However, there’s always room for improvement and that’s why we’ve come up with the list of features we’d like to see in the Matterport Pro3 camera!

Previous models of the Matterport camera have been most effective at creating virtual tours of interior spaces. This is due to interference from sunlight when 3D scanning outdoors.

Currently it is possible to 3D scan outdoors using a combination of Matterport & Leica hardware but switching between two cameras is time consuming and prone to crashes. The capability to 3D scan external spaces using one camera  would definitely be priceless and would avoid many problems we encounter daily. Outdoor scanning can be extremely important in our line of work and creating exterior and outdoor 3d virtual tours using only the Matterport Pro3 camera would save us a lot of trouble!

Users of Pro1 and 2 know that the hardware has in the past been mostly limited to internal scanning with the 360 photograph option for exteriors, due to the capabilities of the Matterport  lidar sensors and interference from direct sunlight. We can’t wait to see how Matterport will handle this issue with Pro3! 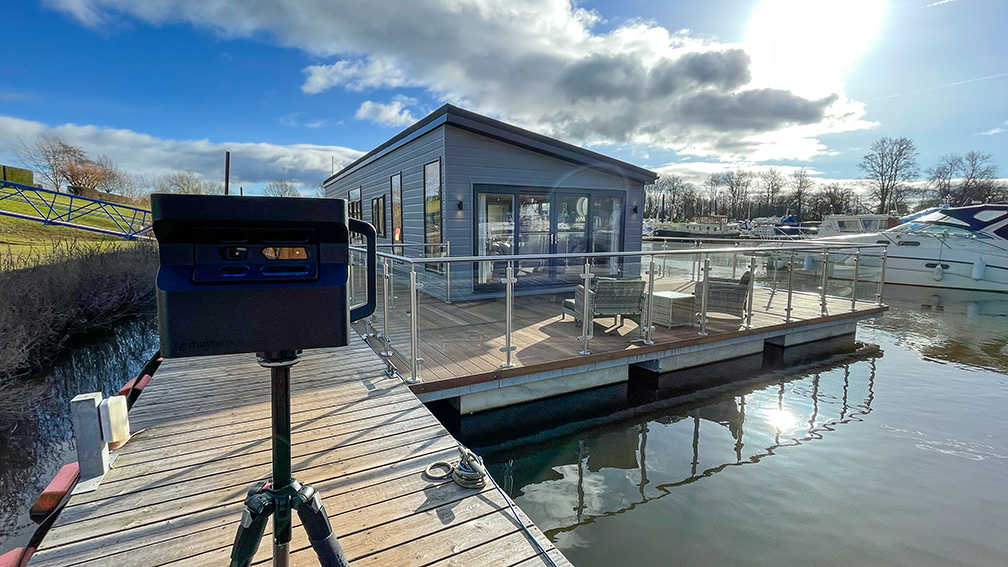 The technology to 3D scan outdoors exists. Other 3D scanners, such as the BLK360, can  capture 3D scans outdoors and we can’t wait for Matterport to implement this technology into their hardware. Seamlessly 3D scanning with one camera from inside to outside would be awesome!

Each Matterport camera captures 3D data as well as images with each 360 rotation. To effectively capture a space you will often place the camera and do a scan every 6-10 feet to gather as much 3D data as possible.

When capturing larger spaces, such as rooms with vaulted/double-height ceilings, some issues often emerge. This usually means we have to bring specialist equipment like the Leica BLK 360 to capture these spaces. This is especially true if the project is used for surveying purposes where accurately capturing ceiling heights and features is essential.

Increased range on the Pro3 would help solve all of the issues above while also allowing the Matterport solution to become more appealing to surveyors. 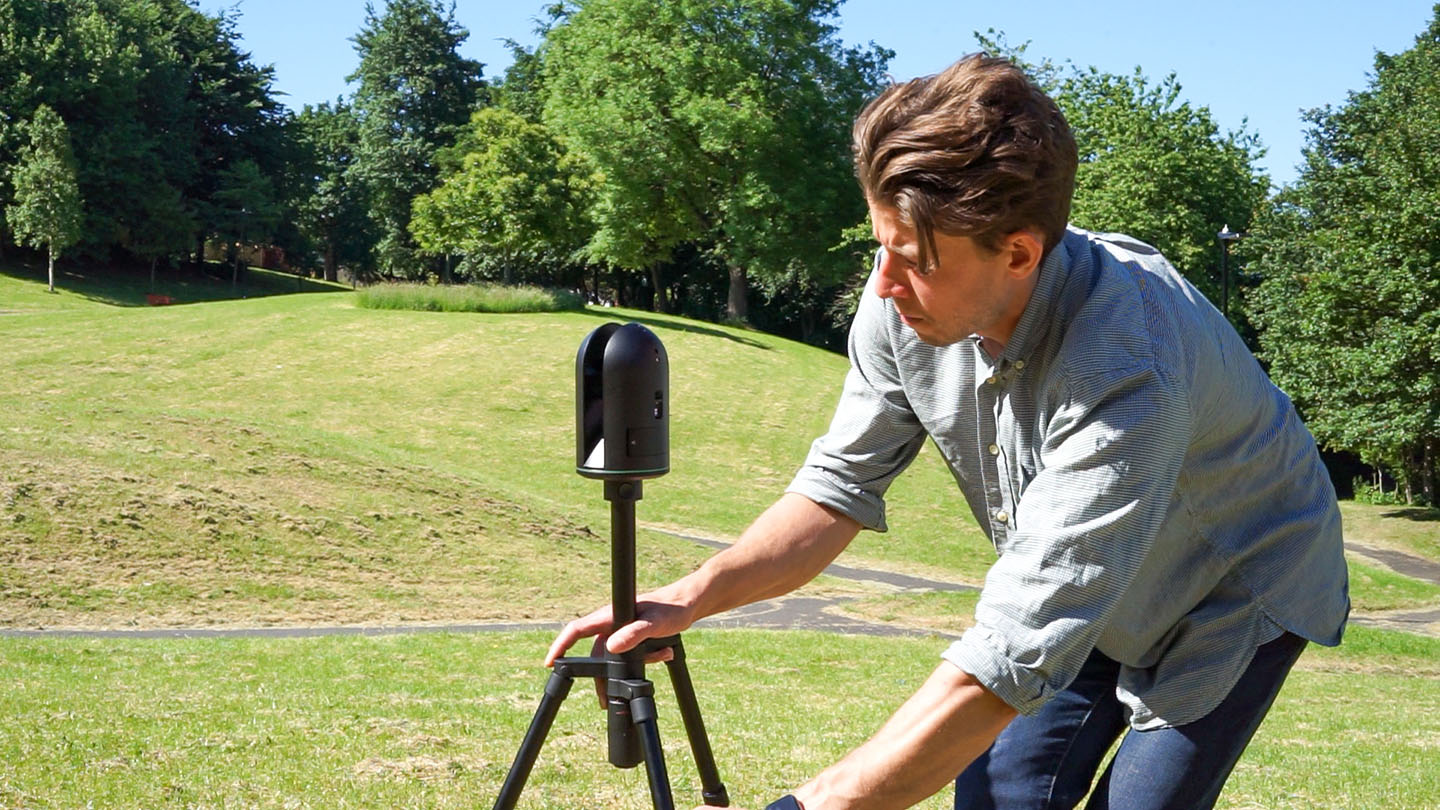 As an extra point, while maybe more of a software upgrade as opposed to hardware, a larger cap on the scan limit would be great for the product. Currently, Matterport has a recommended scan limit of 200 scans maximum. It is possible to go beyond this but with the risk of crashes and glitches.

We’ve experienced an increase in demand for matterport tours in sectors such as education, healthcare & commercial real estate but these tend to be larger buildings so often exceed the recommended scan limit. So an increase in maximum project size would be a logical step forward for the Matterport Pro3 camera.

The Current battery life on a Matterport Pro2 is around 8 – 10 hours, which is enough for most projects. However, when a bigger project presents itself or if multiple days of scanning are required with no good access to charging, a longer battery life would be an improvement. 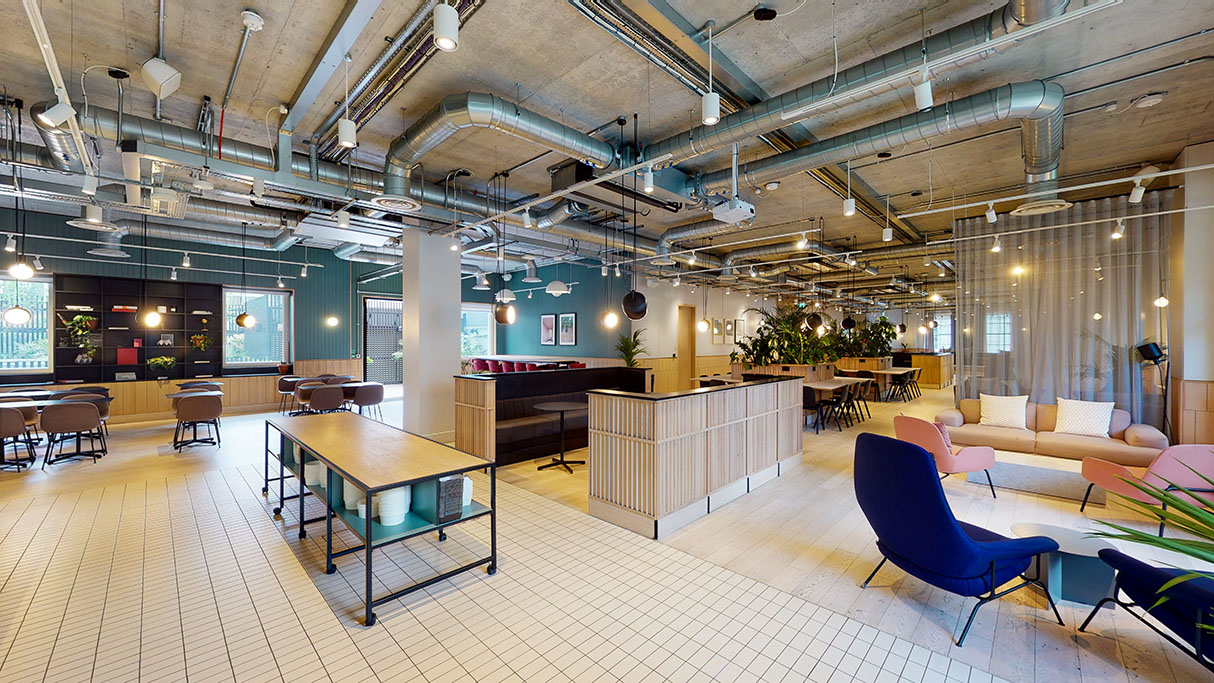 Other 3D scanners on the market, such as the Leica hardware, have removable batteries which allow you to swap them out without having to stop working to charge the camera. This allows higher flexibility when scanning on site.

Matterport cameras capture something called point cloud data which can be used by architects, engineers, property developers and more to gain accurate measurements of a space. This data can be a great starting point when designing  any modifications of an existing structure.

The Matterport Pro2 currently captures 4 million points of point cloud data per scan, while their competitor the BLK 360 is closer to 16 Million points per scan. Of course, these two 3D scanners are designed to fulfill very different roles. But if the Pro3 could come closer in density, Matterport will be the even better choice for commercial projects. Higher point cloud density would give Matterport users more diversity in the outputs they could produce.

Technology is advancing rapidly, and it would be great if matterport could keep up with current tech standards. So offering an 8k version of Pro3 would be a great addition to the already great product matterport offers. This level of image detail would also allow more flexibility in how images captured using Matterport can be utilized. Higher detail images are more malleable and can be cropped, edited & amended to suit a client’s needs.

How Much Will The Matterport Pro3 Cost?

Matterport has stated that the Pro3 should be coming out later in the year and we can’t wait to hear more about what it will include. Matterport definitely have a lot on their plate, including releasing the iPhone hardware – The Axis, and developing mobile software (products that exactly 0 people have been asking for). Because of that their radio silence regarding the Pro3 is somewhat understandable, but with lots of chatter online it’s safe to say that the Matterport Pro3 camera is coming out soon. With the current buzz, we have decided to take a look at some of the features that would be well-received and most likely to be featured in Pro3.

To learn more about virtual tours click here to visit our Learning Hub.